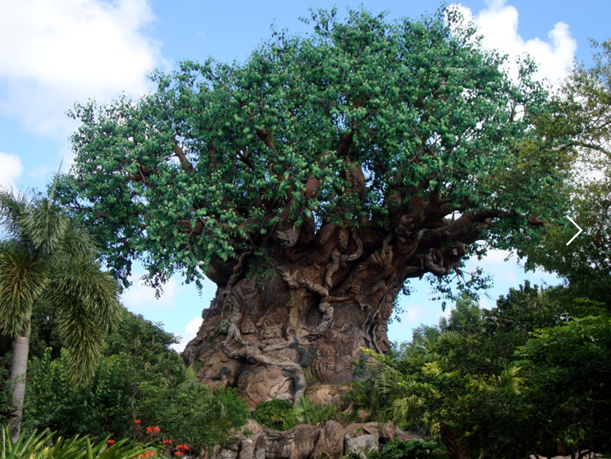 Animal Kingdom is Disney’s most realistic park, it is dedicated to some of the earths most exotic species and wonders, amongst its lush landscaping and authentic looking architecture it houses the most impressive structure called the ‘Tree of Life’, after entering the park through the ‘Oasis’ you are greeted by this 145ft exquisite artificial tree that has over 300 animals hand carved onto its trunk. It is the parks main focal point and is the hub of the  6 main areas that branch off of it.

Take a ride on the Kilimanjaro Safari through the Savannah to spot a good look at some of Africa’s most beautiful species, Animal Kingdom is in fact home to over 1,700 animals which incorporate just over 250 species.

Each area of this park is authentically themed and you are transported to the village streets of ‘Harambe’ in Africa, the mystical delights of the ‘Kingdom of Anandapur’ in Asia, step back in time at ‘Dinoland USA’ and uncover some of the biggest beasts that once walked the planet. 2017 brought the opening of ‘Pandora’ dedicated to the Box-Office hit film Avatar, this lush world of Pandora surrounds you with vivid colours, striking foliage from the film and at night becomes a host to glowing wonders as the world of Pandora illuminates to give it a unique dreamlike feel, there is no comparison to anything like it in the other parks.

Although this park is a tropical paradise with its plants, animals and landscaping, it is indeed a home to high tech rides and attractions beyond the imagination, this park offers something for all ages and caters for the thrill-seekers and animal lovers alike.

Experience some of your favourite characters in their safari attire, and dine in some wonderful places with flavours from far and wide.